What does a conference focused solely on ‘immersive technologies’ look like in 2022? In Rotterdam, located in the luxurious ‘de Doelen’ building, Immersive Tech Week (AKA VR Days) took place  between Nov 28 - Dec 2.

The ITW conference was split between two parts of the building, one part was open to the public and free, while the other was more private and only for paid ticket holders. For the attendees that paid, the first room they were greeted with was a large ‘Playground’, with the PICO and Meta booths being front and center. Around these large booths were various companies including TNO showing off their Hololens usage and innovative tech such as haptic gloves created by Senseglove.

At a VR Conference in 2022, experience is at the center stage, where attendees are expected to put on headsets and see new simulations that wow them. While the playground buzzed, the presentations and presenters discussed perspectives and use cases of VR that pulled from various areas of sciences, design, art and engineering. These presentations included roundtables, which brought various stakeholders together to ask about future impacts of XR on education and responsible technology in a broader sense.

The XR team met at a room overlooking central Rotterdam and waited patiently for whoever may want to join the roundtables. The group filled about two full tables which engaged the content of the discussion well, raising new ideas and points pertaining to the influence of XR in various fields of education and research.

The roundtables were for one hour and were quick to eat up the time as comments and observations were passed around. For the future of education, many points were made about future competencies of educational instructors. Many participants agreed that instructors may begin to take on a more ‘coaching’ role. For example, coaching students through simulations that are training them in skills or creative processes. Other discussions revolved around how simulations currently assist in ‘screening’ candidates or learners on where they are on a learning spectrum in order to place them in the right group or level.

Simulations can help train very practical skills much quicker than reading about the skill or watching a video; in essence, driving the virtual forklift helps train drivers quicker than just watching a video of someone driving a forklift. This topic also tied into thoughts about how more social studies could benefit from scenario based simulations; would it be possible to have the perspective of someone with gender dysphoria? And what would it be like to be in their (virtual) shoes with simulated role playing? Conversations like these lead to new connections and some optimistic views of near future usages for XR in education and research.

Immersive tech week also allowed our team to see how other roundtables were performed. The Rathenau Instituut held a ‘Citizens thinktank’ where they asked participants to look at the world with Augmented or mixed reality in mind (see photo for example). Citizens discussed how the information in the example was not interesting to them, or taking up space of their view. Was this information shown to them via AR tech correct? Who’s interpretation of the world is this? Participants were then asked to draw how they would view the world with AR or Mixed Reality over-layed on it. Overall the session was extremely creative and helpful to help citizens model new ways of thinking about their futures with virtual information in mind. 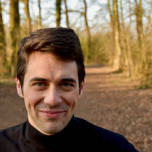